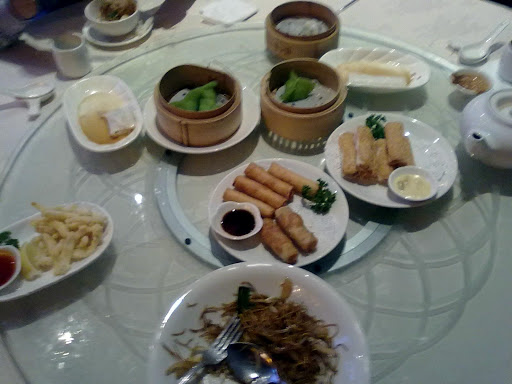 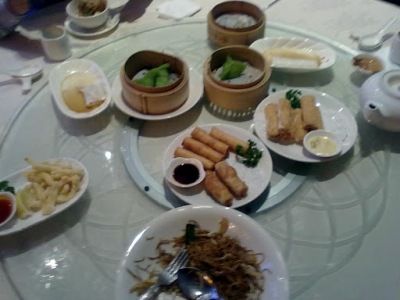 When Dragon Castle opened around the corner four years ago, I could hardly believe it and nor could a succession of incredulous reviewers. What on earth was a 200 seat restaurant, serving Cantonese cooking as good as any in London, doing at the Elephant?

I suppose it’s a sign of how established the Chinese community has become here since 1997, when Hong Kong was handed back and Metro Central Heights was marketed to anxious capitalists looking for a bolt hole as being 5 minutes from Trafalgar Square (which it is, given a motorbike and no red lights). Since then, plenty of Chinese students have come to study at Southbank University, which has become a major property developer, building halls of residence for students from colleges all over London. Dragon Castle occupies the ground floor of a dormitory building for art students from Camberwell & Central St. Martins.

It’s big and its menu is voluminous, containing rare and precious specialities (e.g.: abalone) and one feature which I totally respect: a list of fish, plus a list of seven ways they can be served, so one can mix and match. One might choose swordfish steamed or grilled with black bean sauce, for example, or red snapper fillet grilled ‘with Mummy style’ (no idea!). Plus, they offer lobster and crab in no fewer than ten permutations. In fact, Dragon Castle is quite an emphatic statement. It says that, at the site of the largest urban regeneration project in Europe, the Cantonese are here to stay. Not that its clientele are exclusively, or even predominently Chinese. This is the Elephant, guv. All are welcome.

I have but one problem with the place. Its opening coincided, more-or-less, with my vegetarianism. Although the menu also offers a list of nine greens, inviting customers to ‘Select Any One Item of Vegetable… And Then Decide on a Cooking Method’ from a list of ten, the Cantonese don’t really do vegetarian. Seafood and pork is what they do. So, I haven’t been as regular a customer as I might have been. But I do love dim sim.

Yum cha – taking tea, which implies consuming dim sum – is perhaps the most civilised, sociable way to eat. It’s best if you can raise a party of at least six, so you can bag one of the circular tables with the turntable in the middle. Dragon Castle has a numbered, illustrated dim sum menu and an ordering system in which you indicate how many orders of each dish you want (most items are served in threes or fours) with prices starting at £2.80, going up to £3.50. Then there’s the specials list, upon which DC appears to pride itself. We enjoyed bright green seafood dumplings with spinach, as seen in the picture above.

Usually, my friends are happy to leave the ordering to me and I am more than happy to oblige: bring on taro croquettes; grilled turnip cake; cheung fun with asparagus, or scallops. Cheung fun is a kind of rice pasta tube, not unlike cannelonis, stuffed with a variety of fillings, or none. We tried plain cheung fun with sesame and hoi sin, which was weirdly good.

Har gow – prawns steamed in pleated wrappers – are deemed to be preeminent dim sum and the expertise of a dim sum chef is determined by how many pleats he puts in his wrapper. Well, here the har gow are wicked but the crystal prawn dumplings with chives are even better. Har gow are often or usually accompanied by shumai, pork dumplings, and cha siu bau, pork buns. But I don’t, as a rule, do pork. Not that one can easily avoid pig meat here. The wonderful crsipy taro croquettes have porky paste at their centre, as does the sticky rice wrapped in a banana leaf, to which I am also partial.

I customarily order noodles and greens – this time, pak choi with ginger and garlic – to fill up on and, in a party, do the ordering in at least two rounds because there will always be items that some of your friends feel they didn’t get quite enough of. Once can afford to do this because the prices are eminently reasonable. We all felt very well fed and the bill came to £16 each.