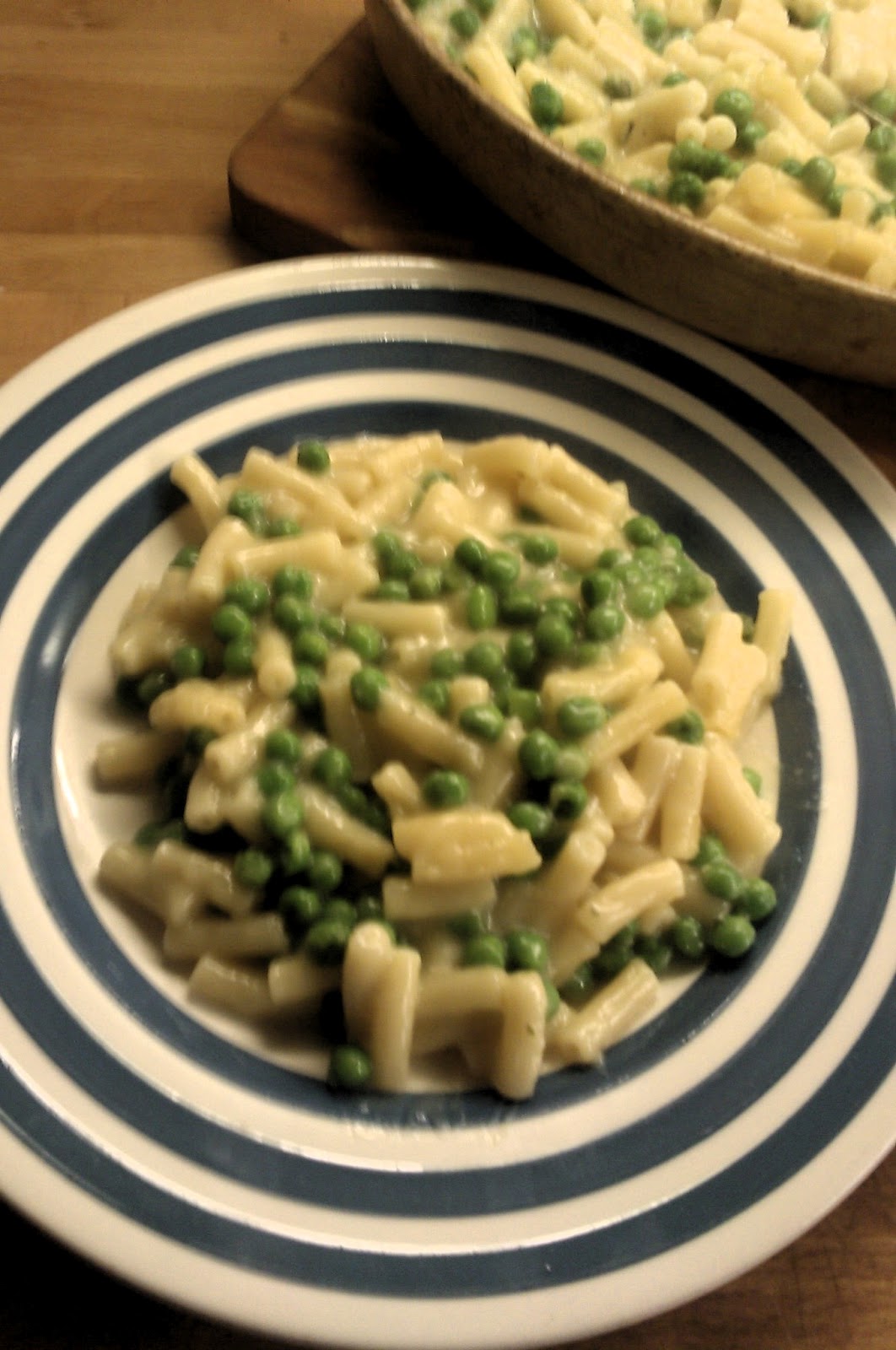 Easy Macaroni Cheese with Peas, after Heston Blumenthal, to give it its full title, is a shockingly simple variation on the old favourite that’s so easy it can be made by a nearly blind person with one hand. Peeps with two hands and decent eyesight can tie one behind their back and put a paper bag over their heads.

I never did see the point of Hestom Blumenthal. I mean, I respect Harold McGee’s work

and the chemistry of cooking is all very interesting, but who can be bothered to fart about with dry ice? Private Eye pegged him in a cartoon depicting ‘Heston’s infallible method for perfectly boiling an egg: first, build a nuclear reactor.’

But then, the great man whipped out his cheese sauce. It happened on the first day of February, on Channel 4’s How To Cook Like Heston and the shock waves continue to reverberate around t’internet (although Channel 4 assiduously polices its copyright). Could this be the paradigm shift that was predicted for 2012?

A conventional bechamel sauce, made with milk and thickened with cornflour, tends to mask the flavour of cheese, or anything one adds to it. So, Heston came up with the idea of mixing the cornflour with finely-grated cheese before combining the mixture with stock! He knew what he was doing, too, telling the camera with a barely-concealed smirk that you’ll find all sorts of uses for his cheese sauce. Such as smothering chips in it:-(

Mr Blumenthal has a four step procedure for producing the perfect silky cheese sauce and I can tell you for starters that step four is, finish the sauce with a big dollop of cream cheese. You may consider this otiose. Heston uses chicken stock with a white wine reduction, but veggies can use Marigold or similar bouillon powder (I’m using one from Suma).

Make 350ml of stock and put it on to simmer for 20 minutes with any cheese rinds you’ve saved in the ‘fridge. If you don’t save cheese rinds, start doing so, because simmering the rind from a piece of Parmesan, say, in the stock infuses it with a wondrously cheesy flavour before you’ve even started.

While the stock simmers, finely grate at least 100g of semi-hard cheese, such as Cheddar. Heston uses 80g of grated cheese but, likesay, he adds a big dollop of cream cheese at the end. You can use whatever cheese you’ve got. In my photo, there’s a lump of Gruyere and a piece of Comté. Yes, it’s from the Comté man in Borough Market and I made sauce with it. I don’t care if that seems extravagant; that’s how we roll in South London.

If you’re blind, get your carer or an obliging friend to weigh the cheese for you and store it in 100g blocks, in a tub. If you can’t see the scale on a measuring jug, experiment with your coffee mugs to find one of appropriate capacity.

Mix the grated cheese with a heaped tablespoon of cornflour, tossing the cheese so that it gets coated with flour.  Before making the sauce, however, boil your macaroni. Heston has specific instructions for this, but then he adds truffle oil to his macaroni cheese and serves it in a hollow cheese rind. Boil your macaroni, making sure it doesn’t stick to the bottom of the pan and, when it’s just about cooked, throw in a handful of frozen peas.

I’m a great believer in frozen peas. There is hardly any recipe that can’t be improved, or complimented, by a few bright green garden peas. I know I’m not alone. Only the other day, I heard Will Holland sing the praises of Birds Eye garden peas, which may give a clue as to why he lost his Michelin star last year! Any supermarket’s proprietary peas will be perfectly good.

While the macaroni and peas are coming back to the boil, strain the rinds from the simmering stock, turn down the heat and add the grated cheese & cornflour, stirring with a wooden spoon. Cook slowly as the sauce thickens. The more you cook the cornflour, the thicker it will get, but don’t use too much heat, or stir it too vigorously, or the fat in the cheese will be overcooked and turn oily.

Strain the cooked macaroni and peas, add them to the cheese sauce, stir the whole lot together and serve. Or put it in a flame proof dish and gratinate it first, if you feel so inclined.