I found out about chilli peppers in my mid-20s, the mid 1980s, when I went to work for Brendan Walsh at Arizona 206, which was named by Anthony Bourdain in Kitchen Confidential

as the quintessential New York restaurant kitchen, because of the cohort of gastropunks who did time there. I was that soldier, hired for my ‘European knife skills’. Brendan, from da Bronx, had made his name purveying his own spin on Southwestern cuisine from premises at 206 East 60th Street that had originally been styled as a Swiss ski chalet. All they did to change the vibe was put mesquite in the aircon.

On day one, Brendan introduced me to the bewildering array of poblanos & pasillas, anchos & Anaheims, to name a selection of the peppers that flavoured his signature venison chilli. He ordered me to cut and clean and slice and dice boxes and boxes of fresh & smoked chillis. So I did that, in the basement prep. kitchen. Then I put the prepped chilis away in the walk-in ‘fridge, cleaned down, and went upstairs to report, pausing en route for a piss (yes, I washed my hands afterwards).

Chef told me, “get a ramekin with some olive oil and sit for five minutes, working the oil into your finger tips. The capsaicin in the peppers you’ve been working with will start tingling, so you need to… What’s the matter?”
“I – erm – visited the bathroom just now and I didn’t wash my hands first.”
Brendan smothered his mirth, but others didn’t bother to hide their glee at my initiation, advising me to “put it in the sink and run cold water over it, bro.” 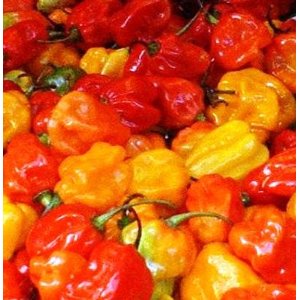 The heat of chilli peppers – here’s a useful list – is usually measured on the Scoville Scale and rendered in Scoville Heat
Units (SHU). Scoville’s Organoleptic Test relies upon the
subjective opinion of human tasters and works on a scale from zero (sweet bell pepper) to 16,000,000 (pure capaiscin). The chillis I’ve listed, above, are all at the mild end of the spectrum, with poblanos about 2,000 SHU. The Tabasco pepper is 30,000 – 50,000 SHU and Tabasco Original is at the mild end of hot sauces; the habanero peppers that power my favourite hot sauce, Brother Bru-Bru’s, pack real oomph at 100,000 – 350,000 SHU although they are far from the hottest of hot peppers.

Like most Brits, I imagine, Tabasco was the first hot sauce I encountered, inevitably in a Bloody Mary. As a food writer, in my thirties, I went on a junket to Avery Island, in the Bayou, where Tabasco sauce has been made since 1868, and can report that McIlhennys are Bloody Mary enthusiasts par excellence. At every engagement, be it on the lawn or down by the jetty, a trestle table would’ve been set up, swathed in a white table cloth, with a large black man standing behind it like the henchman in a James Bond flick, nursing a jug of tomato juice, flagon of vodka, and a king size Tabasco bottle.

Tabasco is made by mashing the proprietary peppers with salt and vinegar and fermenting the mush in barrels, with more salt. Its sodium content is off the scale and that bothered Bruce Langhorne, a major dude who developed hypertension in his 50s and set about creating a pepper sauce that’s free of salt, sugar & preservatives. Brother Bruce’s original recipe hot sauce (don’t bother with the Chipolte or Mild remixes; mild hot sauce is oxymoronic) derives its endorphin-pumping heat rush to habanero peppers, from the Yucatan.

The Scotch bonnet – so-called because it looks like a Tam o’shanter – is a cultivar of the habanero and packs similar heat. My next favourite hot sauce, currently, is Karimix Scotch Bonnet & Mango. Karimix seem perpetually on the verge of a re-launch and at the time of writing their web site is undergoing an overhaul and Hot Headz are out of stock. However, while waiting for fresh supplies, why not try making a hot sauce of one’s own? 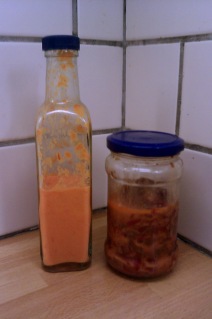 Scotch bonnets are popular in the Caribbean and, therefore, freely available in South London street markets. Not available for free, you savvy, but you can easily buy a bowlful for a quid. At the same time and in the same kind of places, you can pick up a carrier bag full of red and yellow sweet peppers for not much more, say a couple of quid. I’ve been experimenting by cooking down diced sweet peppers with minced Scotch bonnets, adding sugar to make a fiery chutney (in the jar), and/or liquidiz-ising the mixture and diluting it to a runny consistency to make a pokey hot sauce (which is fermenting like crazy, now, in the bottle:-)

I say that I have been experimenting with dicing and mincing, but since I lost my left hand, I’ll never again be employed for my knife skills. It’s to do with balance, I guess. But I now enjoy the services of a glamourous assistant, who does the hard work for me, but may be camera shy. I mean, this blog isn’t part of our agreement, so I’ll have to see if my GA will agree to appear, or if she’ll choose to preserve her mystique.