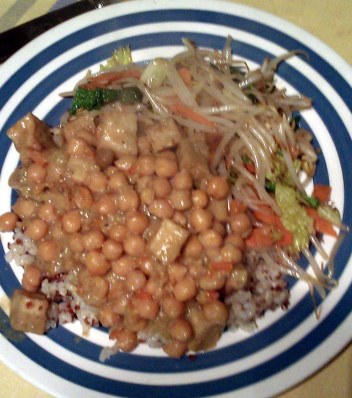 Jay’s coming round and he’s always hungry, so I cooked everything I found in the ‘fridge, which happened to include some boiled chickpeas and cooked quinoa. If you’re veggie & rely on pulses that need to be soaked to be digestible for your energy, it’s as well to have some handy, otherwise you might end up living on junk, like Jay, who’s idea of ‘gourmet’ is one of Tesco’s Finest pizzas.

There are those who advocate tinned chickpeas, but only ever on the grounds of convenience, never taste or nutritional integrity. No! I insist upon organic chickpeas, from FareShares, and I soak ’em over night. If I don’t use ’em the following day, I may sprout ’em, or  boil ’em up & save ’em for later, as in this case. Ahem.

The red quinoa that I got from Fare Shares ages ago was left over from an experiment to see if it cooks any better after soaking for 24 hours. It does! I cooked up a pan of short grain brown rice and mixed the quinoa into it.

My Assistant chopped carrot, celery & onion to a fine dice, plus this half bulb of celeriac that’s been in the ‘fridge since before Christmas, which she cut into quite large cubes, because I knew they would shrink in the oven. I tossed the celeriac cubes in sesame oil, diluted with rape seed oil, and roasted them for twenty minutes or so in a moderately hot oven.

Later, I slipped out to Hiep Phat, my local Vietnamese shop, for coconut milk, bean sprouts and coriander. I didn’t need to buy green curry paste, since there was half a jar in the ‘fridge that wanted using up and, anyway, I didn’t want the flavour to be too intense. I had the green curry at Busaba recently and it was too fierce on its own, IMO, although delicious when mashed up with their coconut rice. Busaba’s rice, BTW, is always impeccable.

When it comes to cans, I’m restricted to the expensive, ring-pull variety and so paid £1.50 for my coconut milk. (As it goes, I had a cheap tin of custard in the cupboard, which I got Jay to open, later, to go with our leftover Christmas pud.) It was too late in the day to get the fresh items from my Oriental friends and I thought about trekking down Walworth Road to Oli’s, the 24 hour Turkish supermarket, for the coriander & also because they have blocks of creamed coconut which work out way cheaper (as I used to do), but it was too far to stagger. Instead, I went across the road to Tesco and scored a bag of veggies ready-prepared to stir-fry, marked-down because it was after 5pm.

Back at home, I sweated the diced veg, then added the coconut milk and green curry paste, mixing them together before adding the chickpeas & simmering for five minutes with the lid on, then adding the cooked celeriac, leaving the pan on low heat, uncovered for the sauce to thicken while I stir-fried the bag of prepped veg. from Tesco. This was  pretty decent plate of food and Jay cleared his in record time. The roasted celeriac was sublime with the chickpeas, in the green curry cream, although it would have been improved by a handful of chopped fresh coriander.