I don’t wish to present myself as the kind of person who enjoys out-of-season vegetables willy nilly, with no thought for the natural order of things, but plump Peruvian asparagus was two punnets for three quid in Marks & Sparks and the first week of January is no time to be abstemious. So, I succumbed.

To feast upon what was formerly a fleeting high Summer delicacy in the depths of Winter may signify that we are living through the end of days, but the flavour and mouthfeel of those crunchy griddled spears of ‘Sparrow grass’ – not to mention the subsequent fragrance of one’s urine – are so seductive that it’s easy to forgive onseslf for being self indulgent. Unless one is wantonly dunking said spears of griddled ‘grass into a jar of Maille (pronounced “my”) Bérnaise sauce, replete with E nos. & egg, never mind its cracked black pepper. But I almost never do that & that is not what this is about. So, like my wee, I shall speak no more of the creamy yet tangy sauce that, according to its manufacturer, represents ‘the delicate essence of fine French cooking’.

No, this is ALL about the inspired accompaniments that I conjured up on successive evenings to accompany my reliably great griddled ‘grass.

Firstly: a luxurious truffled mashed potato, made with double cream that was extra thick and half a 90g jar of minced black truffles in olive oil that a dear friend gave me, but not for Christmas. It’s been lurking in my cupboard, pending risotto (which, now the jar has been opened, is imminent) for a few months. The deeply funky flavour of truffle is intoxicating, but like Chanel, it does not come cheap. This jar bore a price tag of £11.95, which might as well be twelve quid. I don’t want to come across as a Sybarite living purely for pleasure and I probably would not be so self-indulgent as to splurge a dozen notes on such a symphony of boskiness, myself. But I didn’t buy it, did I?

I have refined my mash-making technique – as recently outlined in my aduki pie recipe – to a fine art: whole red spuds, steamed in their skins then left to cool enough to handle & for their jackets to loosen; sliced in half and placed cut side down into a ricer, the action of which will force the flesh of the potatoes through its holes, leaving their skins behind. That is all. Add a few good dollops of cream and as much truffle as you can manage. Combine these three ingredients thoroughly and leave the truffled creamy mash to stand for a few minutes, in the steamer to keep it warm, while the funky flavour fully permeates the mixture.

Griddled grass and truffled mash might call for poached quail’s eggs and Champagne, but I would be deaf to such suggestions. Instead, I added a dollop of black beans that I had to hand as part of my serial efforts to evolve recipes for the pressure cooker. As seen in the photo, above.

The very next day, I griddled the other punnet of asparagus that came all the way from Peru.

This time, to accompany the grass, I wanted to use some roots I had left over from the festive season, beetroot & celeriac. My first thought was to have another go at Yotam Ottolenghi’s gratin. That’s why I bought the cream that ended up in the mash, above. But the cream I bought, when I got home from the shops, turned out to be too extra thick to pour. I figured I’d go back for runnier double cream, but then I remembered this jar of White Sauce for Lasagne that I had in my cupboard.

Now, if I don’t want to seem so self-indulgent as to scoff asparagus in midwinter and garnish it with truffles, I absolutely refuse to be characterised as the kind of person who buys jars of ready made béchamel. It was cheap and I was curious, whaddya? So, I used that instead, making it a lot more garlicky with the addition of several cloves from a batch of garlic I’d roasted. The way I like to use garlic, mostly, is to lightly roast whole heads, peel them when cold and preserve the cloves in a jar with oil in the ‘fridge, so it’s there when I want it and I don’t have to faff about, peeling and chopping, which can take a while when you’re short-handed. Roasted garlic has a mellower, smokier flavour, plus I find that roasting and preserving one’s garlic is preferable to leaving it to sprout and go soft.

I peeled and steamed the roots, sliced ’em as thinly as a one-handed man can and layered them into a small loaf tin with alternate layers of the patented White Sauce. I under-baked it and could’ve, should’ve, would’ve cooked it much longer and slower. But my asparagus was well griddled and I could wait no longer to get my laughing gear around it. I might have eaten the grass separately and no doubt I would have if I’d had a 200g jar of that Bérnaise sauce with cracked black pepper to hand. But there is no documentary evidence of that having happened in this case, despite my local supermarket having discounted said item to £1.19. 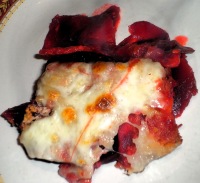 As it was, I packed most of my bake back in the tin, sprinkled it with breadcrumbs and gave it nearly another hour in the oven  on low, melting mozzarella on top in the final ten minutes, which did produce an amazing deep purple colour and velvety texture, although the beets totally overpowered the celeriac. The roast garlic in the sauce didn’t work, either. Still, I like the idea of layered loaves of root slivers and shall take my investigation further, so I guess the moral of this tale for 2014 is keep striving and fail better.