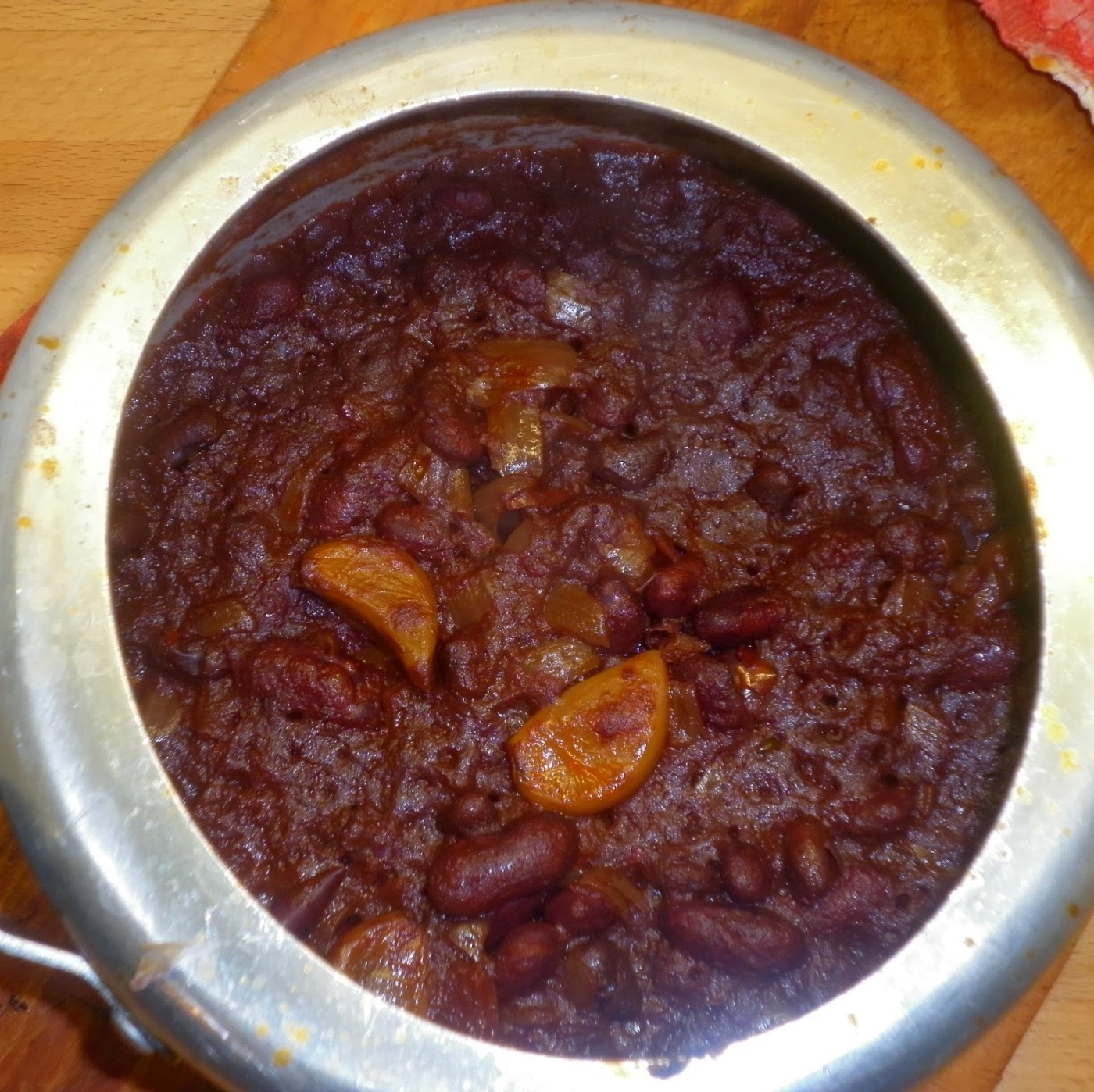 I’m evolving a series of ‘automatic’ recipes, in which one simply puts all the ingredients in my 1.5L pressure cooker, and this Red & Black Bean Chilli may be the best yet.

I buy black turtle and red kidney beans from FareShares, soak and cook a cupful of them together in their soak water with chopped tomato and  sweet pepper purée plus chilli ‘n’ garlic. I lightly roast whole heads of garlic before peeling the cloves and preserving them in oil in the ‘fridge for cooking and tend to throw in whole cloves, as seen in this here picture.

I start by frying half a finely-chopped red onion in a splash of vegetable oil and an (optional) knob of butter, adding garlic and chilli. I did have a little of my very own chilli jam – made with a punnet of Scotch bonnets, minced, with a carrier bag of diced sweet red ‘n’ yellow bell peppers and sweated down with a tablespoonful of molasses – in the bottom of a jar. It got left out of the ‘fridge for too long during the Summer and fermented somewhat.  I bunged what was left of it into a big chilli I made last week and I don’t know when I’ll make more.

Speaking of Chilli Jam, Hot Headz currently has The Chilli Jam Man Original – the original jam that started it all – at half price! Until I get around to making more of my own jam,  I have a jar of chilli powder mixed with smoked paprika that wants using and it’s not as if there’s any shortage of hot sauce around these parts. Just the other day, I scored a bottle of Walkerswood Scotch bonnet sauce
for £1.49 from the Buy’n’Buy Halal meat shop that occupies the former
premises of The Beaten Path on Walworth
Road.

To cooked onion & chillies, I add half a can of tomatoes and a tablespoonful of red pepper purée  – biber salçası –   sweet or spicey. I tend to buy tatli,
the sweet one, and depend upon chillies for heat. Morrisons sells 390g tetra packs of Italian chopped tomatoes with garlic & onion, which I prefer to tins unless they (a) have ring-pulls and (b) are cheap. Alternatively, deploy passata or even a
leftover tomatoey pasta sauce. I recently made a chilli using half a
jar of Arabiatta.

Add
the beans, in their soak water, into the pressure cooker with the other
ingredients and add a bit more water to cover them, leaving the ‘cooker
at least a quarter empty. Put the lid on and cook on high heat until
the steam escapes, then turn the heat down and cook on for a further 20
minutes before turning off the heat and leaving the pot to cool as its
contents continue to cook.

When the pressure cooker has cooled and relaxed, open it and empty the cooked chilli beans into another pot. If it seems a bit less sloppy than you might prefer, add water. Your chilli should be rich, dark and unctuous. It’s almost ready to serve, but before you go ahead, consider the issue of chocolate.

Some say a touch of chocolate in your chilli adds another dimension to its flavour and what they say turns out to be true!

You may add cocoa powder, but I’ve experimented with the buttons of 73% plain, vegan chocolate sold in the radical bookshop that occupies FareShares’ back room, 56aInfoshop. Five buttons melted and mixed in with the chilli certainly gave it a certain je ne sais quoi, but any more buttons was definitely de trop.