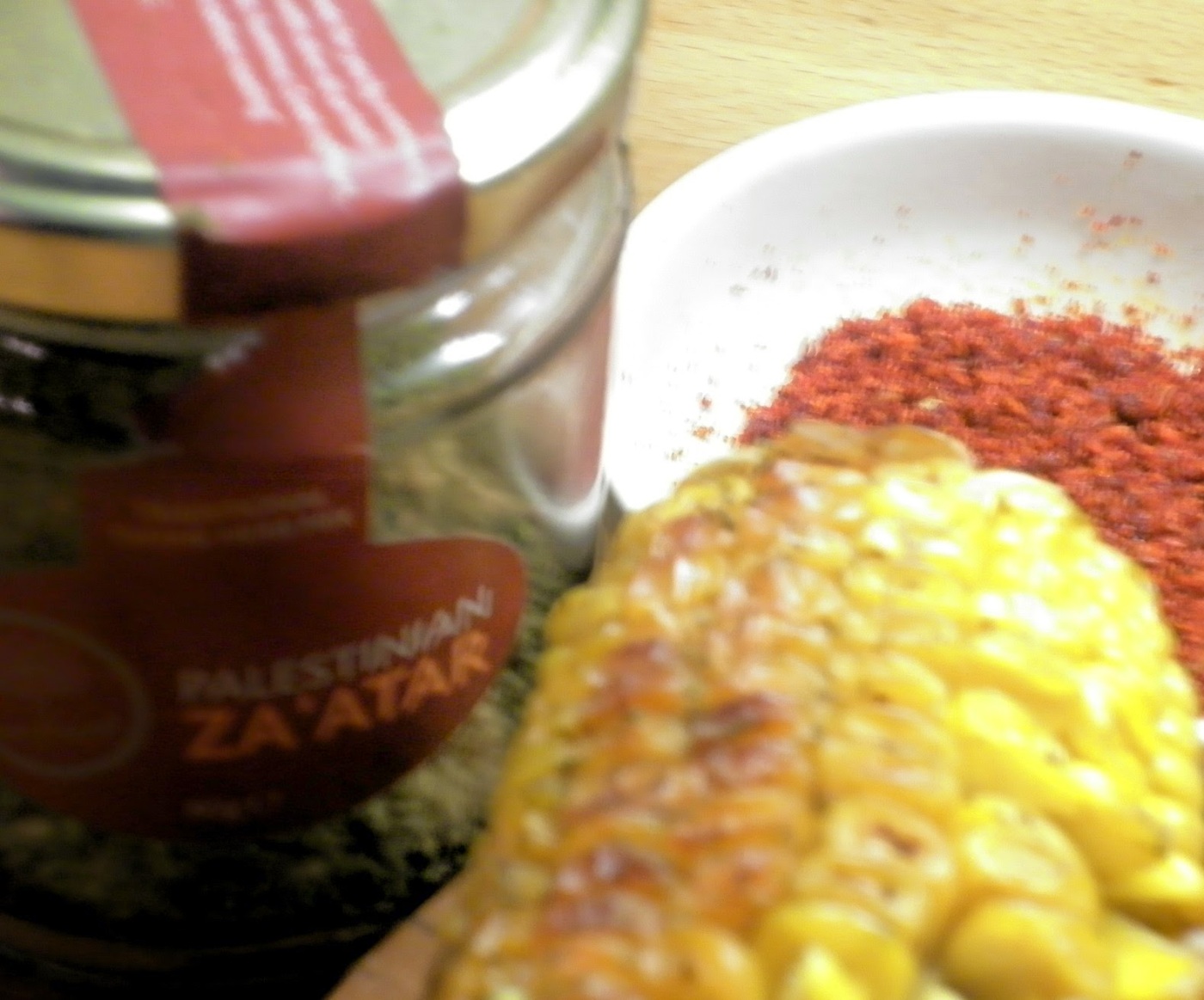 And so another BBQ season sizzles to its climax with the annual Nothing Hill Grates jerk chicken championship, held over the August bank holiday w/e. I & I, naturally, does not do ckicken, nor jerked ‘n’ charred flesh of any kind. For me, Carnival can only be about booming bass bins, contact highs and grilled corn cobs.

This year, what with the rain and all, I stayed dry at home & griddled my own corn, smeared with coconut oil & spiced with red achar masala and green Za’atar from Palestine: the red of the chillies; the green of the wild thyme & the gold of the griddled corn cob. As Bob Marley may say: got to have Kaya now, before the rain comes falling down.

I swerve barbecues because they are irredeemably meaty, but there was a time when I was well into cooking over coals. One fine Summer, on any given Sunday, I ran a rib pit in my back yard, using the bones of the previous week’s ribs to make stock for the next week’s sauce, using Paul Prudhomme’s recipe (swapping pork for chicken stock, obvs.) and marinating each rack of ribs over Saturday night. Indeed, I still feel a pang when I stumble upon an episode of Diners, Drive-Ins & Dives and that guy with the peroxide hairdon’t is tucking into BBQ briskett. Sigh, as Homer Simpleton might say.

Back in the 1980s when living in Manhattan (and earning my corn by cutting up meat in a restaurant prep kitchen) Papaya King was a second home. Now, the nearest I get to a Kosher frankfurter is vegan hot dogs, Tofu Wieners in particular. A case of these was mistakenly delivered to FareShares but they went in the ‘fridge anyway & became a big hit: “Just like real the real thing,” according to one ingenuous volunteer.

Fat Gay Vegan provoked quite a response when he
asked Facebook followers to ‘share photos of your latest vegan
hot dog accomplishments… I wanna see them all!’ There were some mighty fine hot diggety dawgs, but I side with the self-proclaimed ‘Vegan hot dog
queen’ who confessed, ‘My obsession with sauerkraut on
vegan hot dogs is slightly out of hand.’ She sounds like my girl!

This Summer, I’ve recreated the classic hot dog by griddling the sausage and serving it in a toasted bun, with mustard + sauerkraut. ‘Kraut is incredibly good for you, honestly, but it must be served warm and not so sloppy that it soaks the bread. Likesay, the Tofu Wieners, which are supposed to be heated in hot water for three to four minutes, are good for griddlin’, but the Vegusto hot dog is squeezed into a plastic skin that must be removed before going near a grill, so steaming ’em is the only way to go. One can then sear the steamed sausage on the grill, but it is a birrova faff. Good flavour, though.

Bun-wise, I like the mini baguettes sold X3 for a quid in the Vietnamese supermarket on Walworth Road.
As a French colony, the Viets learned to make fresh bread with no fat
in it twice daily, which is great if you can get the bread at breakfast
time. However, Longdan has craftily centralised its baking in Leyton and
its delivery van has been known to travel to the Elephant via Kingston,
so the bread’s half a day old already. Getting the buns for my Steely
Dan listening party on the roof – at which BBQ veggie skewers were
served in mini baguettes, split & toasted and smeared with humous –
eventually entailed the manager phoning to advise me of their arrival!

For reasons too dull to explore, I failed to photograph the finished veggie skewer sandwich, but it was a beautiful thing, you may believe. The trick with your veggie skewers is to part roast the peppers, & I used radishes, and to marinate the mushrooms overnight. Cubes of haloumi are an option for non-vegans (on the left, below). Soak the skewers overnight before assembling your kebabs, so they don’t burst into flames on the barbie. Actually, I took my griddle up to the roof, so my skewers never actually saw flames. Can you believe I purveyed all those shown below, with humous in mini baguettes, and didn’t snap  pic. aof a single one? They were snatching them out of my hand!

I can’t end my Summer recipe round-up without mention of vegan mayonnaise. It’s really easy to emulsify soya milk, honest. I make it using a
stick mixer in a pint glass. You’ll need twice as much oil as soya milk and don’t use good olive oil, except perhaps at the
end, to give your ‘mayo’ some class. Start with mustard powder and a splash of apple juice concentrate, add the soya milk and then mix in the oil slowly, blending continuously, until it has a mayonnaise consistency. Pour it over new potatoes, mix it with shredded cabbage &
carrot to make coleslaw, or chopped celery, apple & hazelnuts to
make Waldorf salad. Happy days!