For several late teenage years a corner of my bedroom wall was adorned with the fold out programme-slash-poster from this amazing event, a free Carnival Against the Nazis featuring the cream of punk luminaries. And Patrick Fitzgerald.

The same groovy teacher who had facilitated our exeat to see The Clash
in Cambridge was prevailed upon to hire a mini bus and drive us down to
London to march against fascism from Trafalgar Square all the way out
through the East End, along Brick Lane – I couldn’t belive the poverty! – to Victoria Park, where Rock Against Racism in association with
the Anti-Nazi League, staged the Carnival.

Birmingham’s militant Rasta revolutionaries, Steel Pulse, were the headliners. Their first single was Ku Klux Klan, about the resurgence of racist National Front vigilantes:- “they say, ‘one nigger the less, the better the show. Stand still, black skin, and take your blow.'” Second on the bill was The Tom Robinson Band, doing his song about coming out, Glad To Be Gay:- “Don’t try to kid us that if you’re discreet, you’re perfectly safe as you walk down the street.You don’t have to mince or make bitchy remarks to get beaten unconscious and left in the dark.”

Racism and homophobia may persist in this day and age, but they are surely less prevalent than forty years ago. As a white middle class kid who boarded at an independent, fee-charging
school, I barely knew any black people. There was a pair of brothers at school whose dad ran a golf course in Tobago. I was relatively privileged, but
liked to think I could be friendly with funky spliff-toting people with
dreadlocks who were deeply into dub, man, if I ever actually met any. It was only a few years later, post-Two Tone, when Jerry Dammers was writing very direct lyrics – “if you have a racist friend, now is time for your friendship to end” – that I truly began to become aware of my own prejudices & naivety.

The homosexuals among my
teachers – for there must have been several – certainly did not espouse gay
rights. It’s fairly obvious that some of the confirmed bachelors who chose to work in the almost exclusively masculine environment of a boys’ school weren’t too interested in women. As boys, collectively if not individually, our gaydar was pretty well attuned, but it was only after leaving school that the one boy in our boarding house whom we all assumed to be gay was able to come out and be glad about it.

For me, still sixteen, there was a romantic interest that day because
the girl I most wanted to be friendly with was present, if not quite by
my side. She lived in Lincolnshire, where I met her at a house party
during the holidays, but went to school in Surrey, so our romance was
mostly conducted by letter. You know, when I wrote those soppy love
letters, I did not comprehend that I was actually addressing a whole
dormitory full of what the Inbetweeners call, ‘clunge,’ to whom they
were read out loud at bedtime before lights out. It’s not like we
really knew each other, or even shared the same interests, but she was
pretty & squishy and there she was, with a gaggle of girls just like
I was there with a dozen of my middle class school mates.

In
the park, I remember her singing provocatively along with Tom
Robinson:- “sing if you’re glad to be gay, sing if you’re happy that way
– hey!” A pugnacious looking deisel dyke in wife beater and jeans with a
flat top haircut was attracted by this lovely little girly whirly and
sauntered over to check her out. To her utter consternation, of course.
Very quickly, her arms were around my neck as she practically cowered
behind me while urgently explaining that she wasn’t gay herself but she
was glad for others to be gay and thought they should be able to sing
about it at the tops of their squeaky voices in public parks without
being judged too harshly…

Telling this, I’m reminded
that her favourite song, or one of ’em, was Patricia The Stripper by
Chris de Burgh. Strange as it may seem, there was a time, before Lady In
Red, when some people were not too proud to declare their affection for
de Burgh. I don’t mean myself, of course – perish the thought! – but those
of a more camp sensibility, the kind who did the Timewarp and enjoyed a
bit of bum-de-ay. Glad To Be Gay had a bump ‘n’ grind to it, so maybe
that why she got so into the song. But singing along to a song about a
stripper doesn’t necessarily mean you’re ready to get your kit off.

The Clash performance at the RAR Carnival is well known because it was filmed by the crew that made Rude Boy, featuring Ray Gange,
an anti-hero who hangs around with the band and aspires to roadie for
them, but doesn’t quite cut it. These were the days before Kosmo Vinyl
came on the scene, when Johnny Green was The Clash road manager, along
with the enigmatic legend they called ‘The Baker’ because he was a bit
tubby. AKA Baker Glare on Facebook, The Baker is now a paranormal investigator (but aren’t we all?) He’s looking into the genetic manipulation of the human race
by extraterrestrial, inter-dimensional beings.

The
Clash didn’t like the movie, possibly because it showed them warts and
all. In memory, there is a particularly excruciating scene, after hours
in a bar, with Strummer in his cups spouting polemical twaddle. On You
Tube, however, this clip of Strummer putting Gange straight on the issue
of Left Wing versus Right Wing doesn’t seem so bad. Whatever the band’s problem, it cannot be denied that Rude Boy does include phenomenal footage of The Clash in the exciting first
flush of their historic victory as the Only Band That Mattered, not to mention the audio recordings, some of which were used on the posthumous live album, From Here To Eternity. 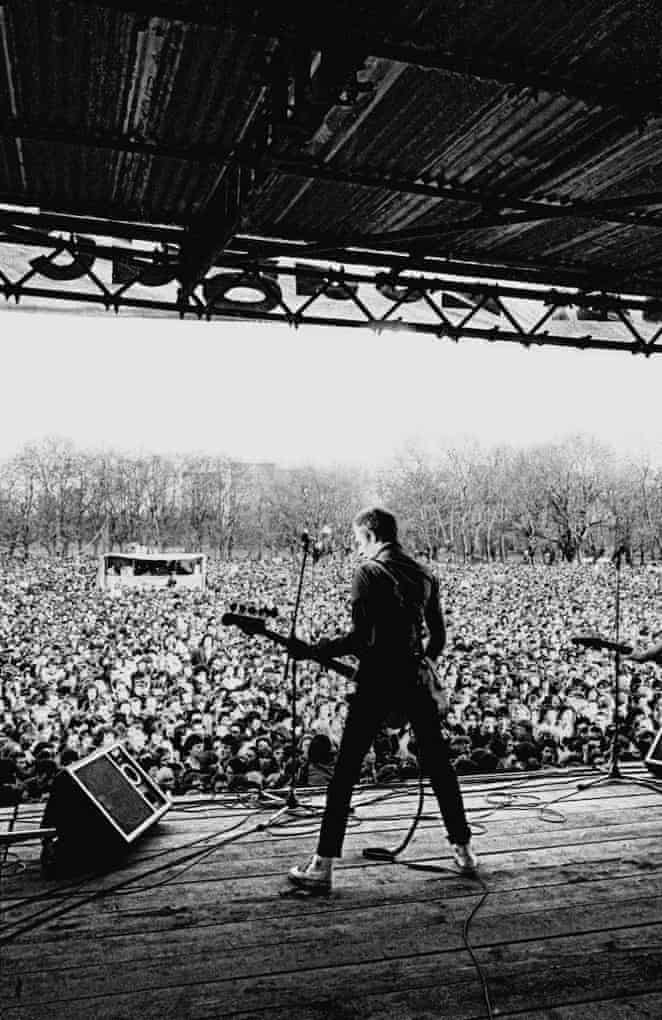 “This is a classic shot,”(left) says Syd Shelton. “The Clash were magic that day, but their
management were mean about letting any photographers on the stage, even
though it was our stage that we’d built. I got so few shots, just a
single roll, and this was a lucky one. It just worked – it’s so
rock’n’roll with the legs spread apart. I think they were playing White
Riot. If you watch the documentary Rude Boy
you can see the whole audience is pogoing at this point – 100,000
people jumping up and down. The excitement was fantastic. I didn’t mind
getting thrown off the stage almost immediately afterwards because I
knew I’d gotten the picture I wanted.”

The throng grew much bigger than the organisers anticipated; it was fucking immense, man, but I wormed my way into the heart of that crowd, edging nearer to the front when The Clash came on and feeling its pulse. It was the first experience I’d had of a big crowd behaving like a single organism, united by a shared cause, bouncing in metronomic rhythm to the music of what were by then the hardest-drilled hit men to charge out of the trenches and go over the top. In archive footage, the entire park appears to throb.

There was a kerfuffle at the end of the set, when someone turned off the power to the PA because the band were running overtime, but The Clash prevailed and returned to a glorious reception that transformed the crowd into a seething mass, all pogoing alonga White Riot, led by Jimmy Pursey.

It was symbolically important to have Pursey sing a song about a race riot; against oppression, performed at an anti-racist benefit concert, because he was lead singer of Sham 69, whose fans included an element that was openly racist and proud of it. But it quickly became apparent that Jimmy Pursey did not know the words much beyond the chorus:- “White riot, I wanna riot. White riot, riot of my own.” Joe handled the more subtle lyrics, about schools teaching you to be thick and that.

Thirty years later, 26.04.08, I went to an anniversary concert put on in Victoria Park by Love Music Hate Racism. Paul Simonon was the only former member of The Clash to grace the stage that day, still smoking, and playing a highly stylised bass part in his project with Daman Albarn, The Good, The Bad & The Queen. At the end of their set, Simonon surrendered his bass and a troupe of brass players – in fact, Hypnotic Brass Ensemble – trooped on, with Jerry Dammers, who introduced an extraordinary version of Ghost Town. The edited version of Don Letts’ film record of the day – it went on for fifteen minutes, with a succession of freestyling local rappers – does justice to what was the most avant garde live  musical statement I witnessed in 2008. When Space Ape came on the declaim the lyric inna dub poetry style, one could hear a pin drop.

Earlier that day, Drew from Babyshambles – heirs to The Clash! – had put together a band to play with punk heroes reviving their great moments from back in the day. Poly Styrene screechily declared, Oh, Bondage! Up Yours! one final time (she died of cancer in 2011). Jimmy Pursey, too, revived his rendition of White Riot and he still had not learned the words!