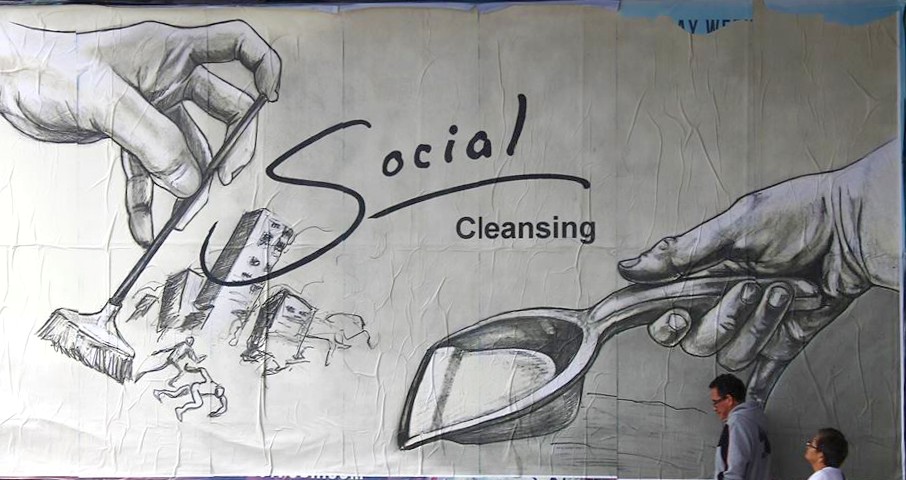 I am much better off than most people – never mind most Universal Credit claimants – because I own a flat in Central London. The unseen assessors who administrate UC can’t seem to get their heads around it. Three times, I’ve been asked at the Job Centre about my residential status. Why have I not applied for help with housing costs? It is because I am a mortgage-paid leaseholder, thank you VERY much.

As such, I don’t have to worry about paying the rent, which I am glad about, since that’s the biggest glitch in the system. I do, however, pay service charges, including an extraordinary one of £13K+. I’m sure your heart bleeds for me. As I pointed out to a former neighbour and ex-squatter who now lives as a rentier in some rural idyll, her bill for the external renovations will be less than a year’s rental income at market rates.

I might be blamed for the lack of affordable housing, because I legally stole my Council flat. I would have to plead guilty, although I am not ashamed. Still, I would argue, the true culprit is Southwark Council, which is engaged upon a programme of urban regeneration, creating a new quartier, ‘South Central London’, based around a ‘skyscraper cluster’ at the Elephant & Castle.

Within weeks of taking office in 2010, the new Council Leader, a barrister called Peter John, cut a deal with the lead developer, LendLease. Not only were they sold a large tract of Central London, then occupied by the Heygate Estate, at a knock-down price, but Southwark also agreed to clear out the riff raff before demolition could commence. Basically, they gave it away. Peter John was rewarded for his perfidy with a junket to Cannes and an OBE from the Tory Governbent.

In 2009, the Council moved from the old Town Hall in Camberwell towards the City, to its shiny new office block at 160 Tooley Street. It bought the building in 2012 and then flogged off the old Town Hall to be turned into a Groovy Centre. Somewhere along the line, Southwark ceased to be a representative community organisation and went comic book corporate: it turned into South Wark.

The new idiocy was confirmed on TV when South Wark CEO, Eleanor Kelly, featured in an episode of the Channel 4 series Undercover Boss. She revealed that, although she is paid close to £200,000 per annum to run our borough, she sees herself primarily as the mother of a handicapped teenage daughter. Another highly important ancillary job, apparently, is to appear in promotional videos for LendLease.

In 2013, South Wark responded to central government spending cuts by insisting that even the poorest people in the borough must pay Council Tax. One may claim a reduction via their clunky ‘MySouthwark‘ web site. The man who put his name to the demand is one of those plutocratic Local Authority officers listed on the annual Town Hall Rich List as earning over £150,000. I wrote and asked him to justify this new feudalism. He did not reply.

My other household expense, the Service Charge, is estimated at the beginning of each year and eventually balanced with a further payment. However, due to institutional incompetence, South Wark can’t keep track of these extra payments. With predictable monotony, it spits out threatening letters about imaginary arrears.

Following the latest erroneous missive, I wrote to the Collecting Officer, informing him that I would henceforth levy my own administrative charge of £50 for each unnecessary response. He wrote back, saying the error was with me. I replied, correcting him and attaching the first invoice. He said, ‘The Council does not agree with you that you can invoice it for responding to an email which was a response to a correspondence received from you clarifying the Council’s position with what happened to your payments.’

He also said, ‘I clearly advised in my email the reason behind your payments being misallocated was your error and not the Council’s and that the issue has now been rectified.’ I suggested that, if the error was with me, he should ultimately be able to explain to the Judge how ‘you were able to remedy it at your end without me doing anything other than advise you of it?’ I added another £50 to the bill and updated the invoice to £100. There has been no further response.