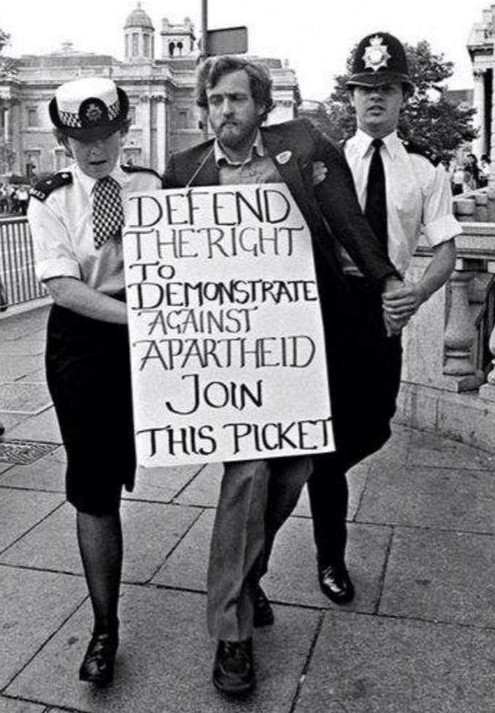 In 2017, I put a tenner at 16-1 on Jeremy Corbyn to become Prime Minister. I did not win, but it was not immediately apparent that I had lost. In 2019, a friend of mine put a tenner at 20-1 on Jezza to win an outright majority, but the exit poll accurately predicted an historic loss for Labour and his leadership was at its end.

“Corbyn was a disaster on the doorstep,” said some bloke on the telly, “everyone knew he could not lead the working class out of a paper bag.” He referred to Jezza’s diffidence on Brexit, as opposed to the clear and simple message transmitted by Johnson, the returning Prime Minister, whose victory takes us out of the EU at the end of January and gives him “a huge great stonking mandate”. Buckle up for five years with Boris in the cockpit.

Corbyn was discredited as Labour leader despite the fact that another bloke on a different telly show, who had accompanied him on a day’s campaigning in order to write a newspaper article, said he was treated like a rock star on the streets. People turned out to greet him wherever he went. His policies were popular and so, apparently, was the man with a minority of people.

Most people seemed to think Corbyn was a Communist terrorist sympathiser who had consistently sided with our enemies and a rabid anti-Semite who believes in a conspiracy theory that a cabal of Jewish bankers runs the world. That’s what UK MSM has been telling them, daily, for four years. It’s not just the Tory tabloids that had it in for Jezza; The Guardian and the BBC did him no favours, either.

A life-long peacenik, Corbyn was willing to talk to Sinn Fein and Hammas in order to negotiate Peace. They said that makes him a terrorist sympathiser. As leader of the Anti-War Coalition back at the beginning of this Century, Corbyn had co-organised the largest demo I’ve ever attended, telling Tony Blair, ‘Don’t Attack Iraq!’ Uncounted hundreds of thousands of dead bodies later, the spectral Blair returned to haunt the political scene once more in order to stop Brexit and drop Corbyn.

A life-long anti racist campaigner, the famous photo  that is my featured image shows Jeremy Corbyn being arrested outside South Africa House for demonstrating against apartheid at a time when the Tory leader, Thatcher, dubbed Madiba a terrorist.  (Or did she?) Now, he was accused of hating Jews, even though many of his Islington constituents are Jewish. The long festering charge of anti-Semitism against Labour has been one of the most depressing facets of the anti-Corbyn campaign.

However the accusations of anti-Semitism are framed, they come back to Jezza’s righteous criticism of Israel and his advocacy of Palestinian rights. Al Jazeera produced, The Lobby, a four part investigation of Israeli influence upon UK politics. Months later, a malicious BBC Panorama programme featured some faces familiar  from the earlier documentary, covertly filmed while being schmoozed, who were now making accusations of institutional Jew hatred within the Labour Party.

Opinion polls may not be entirely reliable, but rarely are they drastically wrong. Going in, it looked like the best Labour could hope for was a hung Parliament. In my wildest fantasy, I foresaw Corbyn somehow persuading Sinn Fein MPs to take up their seats at Westminster in order to secure a majority in coalition against the Tories. The first thing that Fenian government might do would be to recognise the State of Palestine. It was never going to be.

In announcing his resignation, Corbyn intimated that he won’t be abandoning his post with undue haste. Having shifted the Overton window to the left and come up with a manifesto that was universally applauded by Labour’s natural constituency, including Polly Toynbee in The Guardian, Jezza will want to preserve the policies he has put in place. People liked Labour’s plans to properly fund the NHS and re-nationalise natural monopolies, but after three and a half years wrangling they were desperate to Get Brexit Done.

Before he became Leader of the Labour Party, Jeremy Corbyn was a confirmed Euro-sceptic. He was influenced by Tony Benn, of the famous Five Essential Questions of Democracy. Apply them to the EU and one can easily see why it is imperative that we leave what is an inherently anti-democratic institution. Kate Hoey, the veteran anti-EU campainger and former MP in Vauxhall , who stood down at this election, noted that in Partiamentary voting on matters pertaining to the EU, Jeremy always went through the same lobby as herself. But, as Labour Leader, Jezza was obliged to campaign for Remain.

At the time of the referendum, Corbyn faced a leadership challenge from Owen Smith, a Welsh MP who has now gone back to his former career in PR, presumably. When he appeared on The Last Leg, Adam Hills asked Jezza just how pro-EU he was. Before the actual vote and ensuing polarisation, we were weighing the issues, sovereignty vs. economy. Personally, I scored it 60-40 and voted to Leave; the eventual result was closer, 52-48. Jeremy said on The Last Leg he was 70% for Remain. Smith denounced him for it. “He should have said he was 100% pro-EU,” quoth the PR man.

Few predicted that Leave would prevail in the 2016 EU referendum but when the result was announced, Jeremy Corbyn said Britain should immediately invoke Article 50 of the Lisbon Treaty and prepare to leave the EU in two years. Others within the Labour Party, however, took a different view. At the General Election in 2017, 80% of the votes went to candidates who promised to honour Brexit. In late 2019, my Labour incumbent, disloyal Neil Coyle, stood as ‘the most Remain candidate in this constituency’. He increased his majority to over 16,000.

Labour’s official policy was to re-negotiate an exit deal from the EU by next Summer, then have a confirmatory referendum with an option to Remain. Emily Thornberry said  she would campaign for the latter option and against the freshly-negotiated deal. Keir Starmer, most likely to be lead negotiator of said deal, was similarly disposed. In London, Coyle at least represents a constituency which voted 70% Remain. But up North, strident Remainiacs such as Yvette Cooper and Jess Phillips represent constituencies where that figure was reversed. Those two were among the Red Wall MPs who did not lose their seats. All four here mentioned are plausible candidates to replace Jezza as Labour Leader.

Labour lost this election because it failed to grasp the democratic opportunity of Brexit and became a party of Remain in all but name. Jezza said he would remain neutral and act as an honest broker in a second EU referendum. We inferred that he would roll over and allow the pro-Remain opinion within his party to prevail, contrary to his own political principles and the previously-expressed wish of the electorate who, as it turned out, are still keen to Get Brexit Done.